Every study ranking nations by health or living standards invariably offers Scandinavian social democracies a chance to show their quiet dominance. A new analysis published this week—perhaps the most comprehensive ever—is no different.

Iceland and Sweden share the top slot with Singapore as world leaders when it comes to health goals set by the United Nations, followed by Andorra, United Kingdom, Finland and Spain rated number 7 worldwide, according to a report published in the Lancet. Using the UN’s sustainable development goals as guideposts, which measure the obvious (poverty, clean water, education) and less obvious (societal inequality, industry innovation), more than 1,870 researchers in 124 countries compiled data on 33 different indicators of progress toward the UN goals related to health.

The massive study emerged from a decade long collaboration focused on the worldwide distribution of disease. About a year and a half ago, the researchers involved decided their data might help measure progress on what may be the single most ambitious undertaking humans have ever committed themselves to: survival. In doing so, they came up with some disturbing findings, including that the country with the biggest economy (not to mention, if we’re talking about health, multibillion-dollar health-food and fitness industries) ranks No. 28 overall, between Japan and Estonia. We are talking about United States, by the way...

Eradicating disease and raising living standards are lofty goals that have attracted some of the biggest names to philanthropy. The 17 UN Sustainable Development Goals (SDGs) themselves are a successor to the Millennium Development Goals, a UN initiative that from 2000 to 2015 lifted a billion people out of extreme poverty, halved the mortality of children younger than five years old, and raised by about 60 percent the number of births attended to by a skilled health worker.

The research team scrubbed data obtained on dozens of topics from all over the world. For example, to make sure they had adequate data on vaccine coverage for each region, they looked at public surveys, records of pharmaceutical manufacturers, and administrative records of inoculations. “We don’t necessarily believe what everybody says,” says Christopher Murray, global heath professor at the University of Washington and a lead author of the study. “There are so many ways they can miss people or be biased.”

“The U.S. isn’t doing as well as it perhaps should compared with some countries in Western Europe,” Murray said. 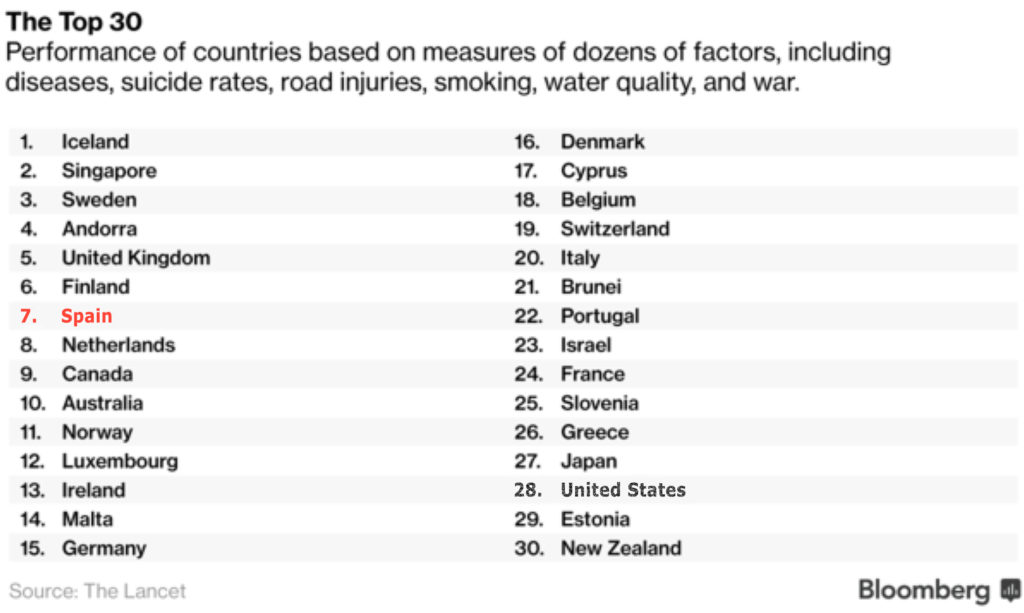 The fact that Spain has been rated number 7 on the worldwide top 30 country’s list, it’s not a surprise. The relax way of life, the fabulous weather, the national health-care system used by many Europeans living permanently in this incredible country, the healthy choice of food and the outdoor living has been contributing to the results of this position. The public security is also another factor that has been taking into account, together with the sanitation services and the education system, making Spain a clear choice to relocate your family or for your future retirement destination.

In all regions of the world and across the economic development spectrum, the problem of overweight children has grown worse, the study shows.

The authors lauded five countries in particular, one from each quintile, for their prominent gains:

The research group allowed organizers to “harness people’s knowledge and expertise, local data sources, and quirky knowledge that only somebody locally may know,” said Murray. But the UN goals were a tough starting point, given their nebulous categories and confusing terminology. The whole system has the intuitive clarity of Britain’s pre-1971 monetary system, with its pound (or quid), shilling (or bob), pence, half-crown, and farthing. Economist William Easterly of New York University has ridiculed the SDGs as “senseless, dreamy, garbled.” But making fun of international bureaucratese is as easy as measuring progress toward the UN goals is hard. And that’s exactly what the new Lancet enterprise does—combining the world of public-health research to measure where each nation succeeds, or needs work.

The voluminous work that went into the paper may make measuring the UN goals on health seem even more daunting: The researchers were able so far to evaluate just 70 percent of the health-related indicators called for by the UN.

It may not be pretty, but “we have no chance of success if we can’t agree on what’s critical,” said Linda Fried, dean of the Mailman School of Public Health at Columbia University.

If you are interested in purchasing a property in Puerto Banus or fancy checking for the latest property listed in Marbella, do not take too long, as the high demand for Marbella luxury property and the Costa del Sol, keep pushing the prices higher and higher every month. Do not hesitate to fill the form on Contact Us or give us a call on +34 952 811 010 Today!

How can we assist you?

DON'T MISS THE OPPORTUNITY TO FIND THE PROPERTY OF YOUR DREAMS

Subscribe and receive all the latest news and promotions from us.